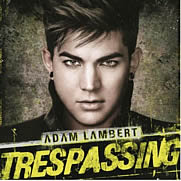 Focus On The Family’s Plugged In site has reviewed Trespassing, the latest release by Adam Lambert that this week became the nation’s first-ever #1 Billboard album by an out gay artist. The lengthy, bitter, nasty Focus review concludes:

There are isolated moments in which Adam Lambert tries to delve below the surface, to get past the flesh and into the soul. Mostly, though, he’s merely interested in sexual satiation. Several songs hint at his willingness to engage in a risky sexual encounter with someone he’s just met. And in this, Lambert perhaps unwittingly reinforces the stereotype historically held about gay men: Namely that they’re promiscuous and sexually voracious, ready to indulge a carnal tryst at virtually any moment.