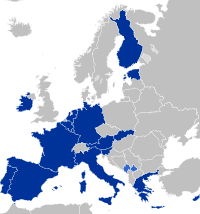 It appears that Greece may leave the Euro Zone and return to a national currency by June 18th, a move that may spark banking panic in other nations where only the first 100,000 Euros on deposit are insured.

“Preventing bank runs in Italy, Spain and Portugal should be the top priority,” said Berenberg Bank economist Holger Schmieding. “Policymakers need to make sure that the potential Greek precedent of a forced conversion of domestic euro deposits into a weak new currency would not spark a run on banks … elsewhere.” The ECB is pressing the euro zone to set up a fund that would prevent this dangerous ripple effect, a message reinforced by ECB policymaker Joerg Asmussen last week. “The recapitalization of a troubled bank by its government may lead to a deterioration of the government’s fiscal position,” Asmussen said. “The deteriorating fiscal position in turn further weakens banks’ balance sheets, through their holdings of sovereign bonds.