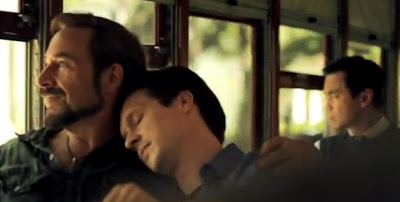 They’re only on screen for less than a second, but predictably Tony Perkins is furious that a gay couple is shown in a new international ad promoting U.S. tourism. Via Right Wing Watch:

In 236 years, America’s never had an international tourism ad. So when Congress passed the Travel Promotion Act, people thought it’d be a great chance to highlight American attractions. What they didn’t know is that it would highlight same-sex attractions. That’s right. The commercial invites people to America-not to see the Grand Canyon, but to celebrate homosexuality. In one scene, a gay man is sleeping on his partner’s shoulder in a trolley. The actors said they were specifically recruited to add a “homosexual presence” to the commercial. According to Brand USA, the ads were supposed to “open up some minds as to what America really is”-which, based on this commercial, is a country of radical values and backwards priorities. I suppose this is part of the President’s push to “rebrand” America. It’s just too bad he used a travel ad to feature so much cultural baggage.

Previous KANSAS: Pastor Defends Call For Government To Execute All Gays
Next Doing Good Without God