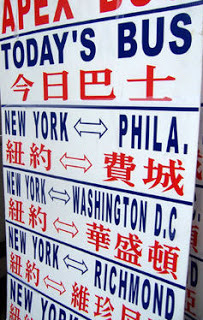 The “Chinese bus” has long been the cheapest and to many, the hippest way to travel between the major cities of the Northeast. But long plagued by shoddy maintenance and not a few accidents, their safety record has been as legendary as the low price. Today the feds, for now, put an end to most of them.

Federal transportation officials citing serious safety concerns announced on Thursday that they had ordered the shutdown of 26 bus operators, many of them based in Chinatown and offering inexpensive rides along the East Coast to thousands of passengers a day. In addition, 10 bus company owners, managers and employees were forced to cease all passenger transportation operations, including selling tickets, according to transportation officials who called it the biggest crackdown in the history of the Federal Motor Carrier Safety Administration. The operators cited had employed drivers who worked long hours, had serious driver qualification violations and, in many cases, did not have valid commercial driver’s licenses, officials said. The companies also used vehicles that had not been regularly repaired or inspected.

Today’s move was apparently spurred by the gruesome 2011 accident in the Bronx in which 15 passengers were killed when the driver allegedly fell asleep behind the wheel. My own experience with the Chinese bus involves a Christmas Eve 2005 trip to DC in which it felt like we took every curve on two wheels. I almost kissed the ground when we got there.

Previous 2011: Most Anti-LGBT Murders Ever
Next John Edwards Found Not Guilty