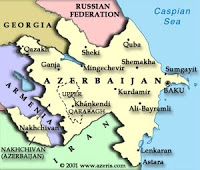 The Eurovision finals are taking place this weekend and as many of Europe’s media outlets poured into Baku, neighboring Iran took to its state-controlled press to accuse host nation Azerbaijan of allowing a “gay parade.”

On Wednesday, Iran claimed that the Azerbaijani government was insulting Islam because it was going to allow a “gay parade,” according to the semi-official Fars news agency. In fact, there has never been such a demonstration in the country, and none was planned for Eurovision. In reality, Tehran is upset because the oil-rich Azerbaijan concluded a multi-billion dollar arms deal with Iran’s arch-enemy, Israel, in February and apparently promised to allow the Israeli Air Force access to several military airfields in Azerbaijan — which the Israelis could potentially use for an attack on Iran’s nuclear facilities. As it happens, there was never any chance of a gay pride event being held to coincide with Eurovision, as gay rights activist Ruslan Balukhin explains. “We would need the city’s permission for that — and we would not get it.”

The activist quoted in the above article contends that gay Eurovision attendees will be safe “not because the Azerbaijanis are tolerant, but because the authoritarian government doesn’t want any disturbances.” Last month Islamic terrorists vowed to use “chemical weapons and knives” against gay visitors. The 57 year-old competition is heavily followed by gay fans, many of whom travel to the host cities every year for associated parties and nightclub events.