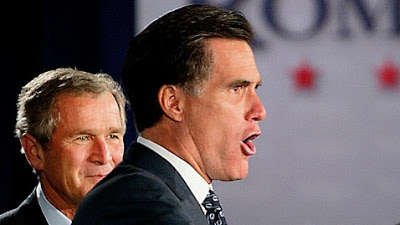 It’s not much of an endorsement and likely won’t include any campaigning on Romney’s behalf.

“I’m for Mitt Romney,” Bush told ABC News this morning as the doors of an elevator closed on him, after he gave a speech on human rights a block from his old home — the White House. Bush’s endorsement isn’t a surprise, given that Romney is virtually the Republican Party’s nominee. But the 43rd president has been absent from the 2012 campaign and hasn’t made any public comments showing his support for Romney.

The Obama campaign has an immediate reaction.

“President Bush has endorsed Governor Romney, and Governor Romney has endorsed a return to Bush-era economic policies: massive tax cuts for the wealthiest and no accountability for Wall Street, which led to huge deficits and tepid growth. Now Romney wants to double down on those same, failed policies – expanding upon the Bush tax cuts for millionaires and billionaires at a cost of $5 trillion, and, once again, allowing Wall Street to write its own rules. While President Obama has pursued policies that have helped create more than 4.2 million private sector jobs, revived manufacturing and the auto industry, Governor Romney would return to the same policies that dragged our economy down and punished the middle class.”