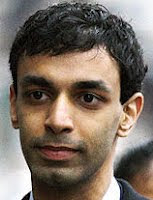 “I accept responsibility for and regret my thoughtless, insensitive, immature, stupid and childish choices that I made on Sept. 19, 2010, and Sept. 21, 2010. My behavior and actions, which at no time were motivated by hate, bigotry, prejudice or desire to hurt, humiliate or embarrass anyone, were nonetheless the wrong choices and decisions. I apologize to everyone affected by those choices.” – Former Rutgers student Dharun Ravi, apologizing for the first time. Ravi has elected to begin his 30-day jail sentence even though the prosecutor’s appeal of his meager punishment is going forward.