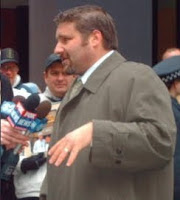 Douchebag Of The Day – Matt Barber

“They used to arrest middle-aged perverts who get their jollies from talking dirty to children. Today, they get a television show, a nationally syndicated column, a lecture circuit and multiple visits to the Obama White House. You know: ‘Forward.’ The irony is palpable. Dan Savage, sex columnist and founder of the LGBT anti-bullying ‘It Gets Better’ campaign, has been outed. Not as a homosexual. He’s out and proud in that regard. In fact, Savage pushes his ‘anything goes’ brand of sexual anarchy on kids worldwide. MTV has even given the sex-obsessed radical his own show, ‘Savage U’ — a moral-relativist platform from which to corrupt the kiddos. Creepy stuff. No, Savage has finally managed to publicly discredit himself as the anti-Christian bigot and bully he’s always been. Never again will this guy be taken seriously as an anti-bullying crusader.” -Liberty Counsel spokes-pig Matt Barber, writing for the hate group Renew America.

NOTE: In the above-linked piece, Barber joins the lying liars who continue to claim that the “walkout” of Savage’s speech was a student-led spontaneous mass exodus of weeping girls and not the staged departure of two dozen smirking kids pulled by the strings of Focus On The Family.