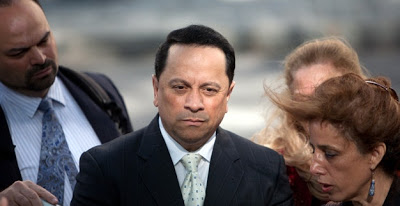 Waving a rosary to ward off “evil spirits” proved useless for former New York Sen. Pedro Espada, who was today found guilty of embezzling over $500,000 from the Bronx health clinic he managed.

Espada sat stone-faced when he was found guilty of ripping off the clinic. His wife, Connie, looked stricken and appeared near tears. Before the verdict was read, Brooklyn Federal Court Judge Frederic Block warned everybody to behave. “I don’t want any ruckus or noise because they are not finished with their service,” the judge said of the jury. Prosecutors, however, were giddy. And when they left for lunch, loud cheers could be heard coming from their elevator. But the government didn’t get everything it wanted. The jury, which struggled for 11 days before finally giving up, failed to reach a verdict on the fifth theft count against Espada for stealing nearly $80,000 from Soundview in 2009. Nor was it able to reach a verdict on the three conspiracy counts against Espada.

Espada is the third former New York Senator to be sentenced to prison in the last two months. All three are Democrats. And all three played a role in the 2008 debacle that, for the time, had blocked same-sex marriage for New York state. The remaining douchebag of that infamous quartet is Ruben Diaz.