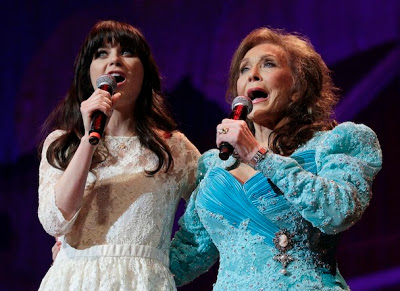 Loretta Lynn has hand-picked pixie Zooey Deschanel to play the title role in the musical version of the story that won Sissy Spacek an Oscar.

Lynn, 80, unveiled plans for a musical adaptation of “Coal Miner’s Daughter” during a Grand Ole Opry show at the Ryman Auditorium on Thursday night. Wearing one of her signature long-sleeve, floor-length dresses, the Country Music Hall of Fame member blew through four songs before bringing Deschanel onstage to sing the title tune. The announcement mirrored the way Lynn invited actress Spacek on the Opry stage in 1979 to reveal that Spacek would play her in an upcoming film. Spacek later won an Academy Award for her performance. “I have a friend here tonight. I don’t know if ya’ll remember when Sissy Spacek was with me. I brought her out here with me. She about fainted. We both fainted,” Lynn said with a laugh. “She went on to do the ‘Coal Miner’s Daughter,’ and you know from there. Well, there’s a little girl backstage that’s going to do the play of `Coal Miner’s Daughter’ on Broadway,” Lynn continued. “Zooey, where you at, honey?”