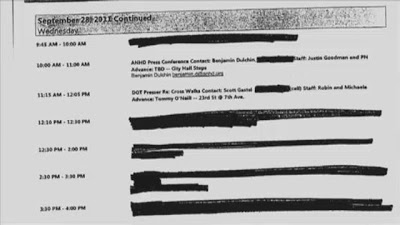 Christine Quinn, Speaker Of The

Twenty-four hour local news channel NY1 filed a Freedom Of Information request to obtain the 2011 schedule of NYC Council Speaker Christine Quinn, the presumptive leader in the 2013 mayoral election. What they got back was a list that included over 600 hours of blackened appointments.

They could be instances when she goes to spinning class in TriBeCa. They could also be certain instructions to staff or interagency deliberations that aren’t finalized. “It seems that there might have been names, names of staff members for example, public employees, other people that Ms. Quinn might have met that did involve the performance of her duties,” said Robert Freeman of the State Committee on Open Government. “It would be difficult to understand why those names would be redacted.” The schedules do reveal that Quinn has met with at least four campaign fundraisers during the work week. Half were in the council’s offices.

In 2009 Quinn won reelection with over 80% of her Chelsea/West Village district’s vote, but her support for overturning term limits, which enabled third terms for both herself and Mayor Bloomberg, angered many former supporters. Quinn’s backing of the term limits issue was considered by some pundits to be a campaign tactic to buy time to overcome a then-raging scandal about her administration of a $17M slush fund that had allocated city funds to nonexistent organizations.

In September 2011 a federal investigation into the slush fund “closed without taking up any action,” according to City Council attorneys. Quinn continues to be dogged at personal appearances by a small but very vocal group of LGBT detractors who claim she is the puppet of wealthy landlords and developers intent on further gentrifying the poor out of New York City.