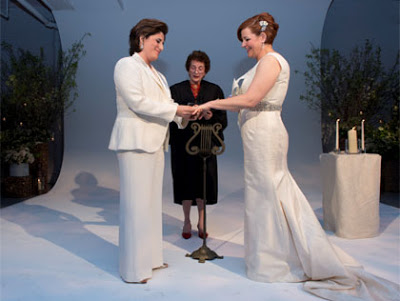 Quinn walked down the aisle in a cream-colored gown designed by New York-based Carolina Herrera, with a one-of-a-kind decorative hair comb by Lulu Frost, fashioned out of family heirlooms. Catullo wore a silk suit designed by Bronx native Ralph Lauren. Both women, whose moms died of cancer when they were teens, were escorted down the aisle by their tough-as-nails, blue-collar dads, both World War II veterans, Lawrence Quinn, 85, and Anthony Catullo, 86.

Kim Catullo strode in to Bruce Springsteen’s “If I Should Fall Behind” followed by Christine Quinn, who entered to Beyoncé’s version of “Ave Maria.” The bridal party walked in to a mix version of “Over the Rainbow” and “What a Wonderful World” by the late Hawaiian singer Israel Kamakawiwo’ole. Before 275 guests that included Sens. Kirsten Gillibrand and Charles Schumer and at least 10 City Council members, the couple exchanged platinum wedding bands and eternity bands from Doyle & Doyle.