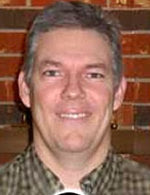 “If there is a man who lies with a male as those who lie with a woman, both of them have committed a detestable act; they shall surely be put to death. They should be put to death. ‘Oh, so you’re saying we should go out and start killing them, no? I’m saying the government should. They won’t, but they should. You say, ‘Oh, I can’t believe you, you’re horrible. You’re a backwards neanderthal of a person.’ Is that what you’re calling scripture? Is God a neanderthal, backwards in his morality?

“Is it His word or not? If it’s His word, he commanded it. It’s His idea, not mine. And I’m not ashamed of it. He said put them to death. Shall the church drag them in? No, I’m not saying that. The church has not been given the power of the sort; the government has. But the government ought to [kill them]. You got a better idea? A better idea than God?” – Pastor Curtis Knapp, of New Hope Baptist Church in Seneca, Kansas.

NOTE: My apologies to the JMG reader who first alerted about Knapp this weekend. I tried listening to the hour-long sermon but grew bored and gave up before I got to the “execute homosexuals” part. Plus my house guest started screaming for me to turn it off.