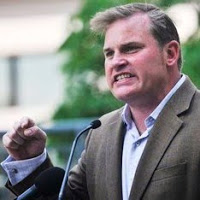 “Obama’s embrace of same-sex marriage will help ensure he becomes a one-term president, and his political demise will begin with North Carolina. Despite what many in the media claim, the American people do not support same-sex marriage. They sure as heck don’t in North Carolina, where voters made it clear they want to prevent activist judges and politicians like Obama from redefining marriage. [snip]

“The president has tied his presidency to a cause that has never been successful with voters — not in a single state — not at any time. Not in blue states such as California and certainly not in swing states such as North Carolina. What Obama has just succeeded in doing is to give an incredibly powerful reason to hundreds of thousands of social conservatives, and especially evangelicals, across America to rally behind Mitt Romney if they want to preserve marriage — and they most decidedly do want to preserve marriage.” – Hate group leader Brian Brownshirt, writing for CNN.