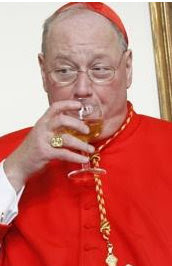 The New York Times last night dropped a bombshell on Cardinal Timothy Dolan, reporting that Dolan paid pedophile priests to go away, rather than turning them in to authorities.

Cardinal Timothy M. Dolan of New York authorized payments of as much as $20,000 to sexually abusive priests as an incentive for them to agree to dismissal from the priesthood when he was the archbishop of Milwaukee. Questioned at the time about the news that one particularly notorious pedophile cleric had been given a “payoff” to leave the priesthood, Cardinal Dolan, then the archbishop, responded that such an inference was “false, preposterous and unjust.” But a document unearthed during bankruptcy proceedings for the Archdiocese of Milwaukee and made public by victims’ advocates reveals that the archdiocese did make such payments to multiple accused priests to encourage them to seek dismissal, thereby allowing the church to remove them from the payroll. A spokesman for the archdiocese confirmed on Wednesday that payments of as much as $20,000 were made to “a handful” of accused priests “as a motivation” not to contest being defrocked. The process, known as “laicization,” is a formal church juridical procedure that requires Vatican approval, and can take far longer if the priest objects.

A victims advocacy group reacted to the revelation: “In what other occupation, especially one working with families and operating schools and youth programs, is an employee given a cash bonus for raping and sexually assaulting children?”