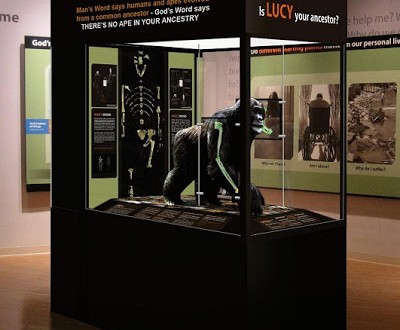 At The Creation Museum…

Kentucky’s Creation Museum has launched a exhibit which mocks “Lucy,” the famed skeleton believed by researchers to be an ancestor of modern man. Via the Christian Post:

Dr. David Menton, staff scientist for the Creation Museum, told CP that the holographic exhibit shows how “Lucy” should not be considered a “missing link” for human evolution. “As this exhibit conclusively shows, the Lucy fossils belong to a knuckle-walking, ape-like creature. We can see that Lucy’s V-shaped mandible was very ape-like, nothing like that of a human,” said Menton. “Our exhibit also demonstrates how significant artistic license can be employed in interpreting what Lucy resembled. There simply isn’t enough information found in the fossil bones for anyone to determine what Lucy looked like.” In addition to the holographic special effects, the “Lucy” exhibit will include several molded casts of the head of Lucy, save with each head having different hair, skin, and eye color features. This was done by the Creation Museum to illustrate how artistic license can create varying results.