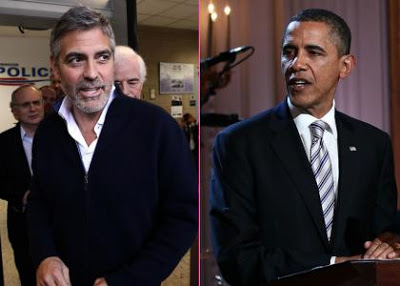 All Time Record At Clooney Fundraiser

President Obama set a new fundraising record at a glitzy event in George Clooney’s backyard last night. The fundraiser attended by Hollywood’s elite raked in a record-setting $15 million, according to DreamWorks Animation chief Jeffrey Katzenberg, a major Obama fundraiser. Most of the 150 or so guests paid $40,000 for a ticket to the event but the bulk of the money raised came from a raffle for smaller donors: The two seats up for grabs were won by a science teacher from New Jersey and a utility company worker from Florida, the Los Angeles Times reports. Obama circulated among stars including Barbra Streisand, Robert Downey Jr., Salma Hayek, Tobey Maguire, and Jack Black before giving a 19-minute speech. He thanked Clooney and noted that the famous “Hope” photo came from a photo of them both. “This is the first time that George Clooney has actually been Photoshopped out of a picture,” he quipped.