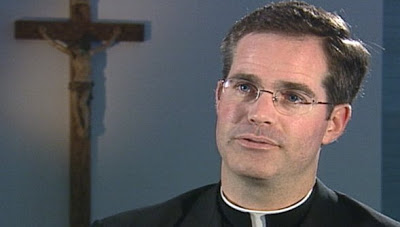 Activist Priest Is A Baby Daddy

A prominent Catholic priest noted for his media appearances has been exposed for fathering a baby with his secret lover.

Father Thomas Williams, who has appeared on CBS and NBC and was interviewed by ABC News for a 2010 report on the Legion, made the acknowledgment after an activist who had sought reform in the order contacted the Vatican with his suspicions. “I am truly sorry to everyone who is hurt by this revelation,” said Williams in a statement. He said that he would be taking a year’s leave from his public duties “to reflect on my commitments as a priest.” According to the National Catholic Reporter, the Legion has confirmed that seven other priests are now being investigated for the alleged abuse of minors. The Legion has more than 800 priests. The Legion of Christ was founded by Mexican priest Marcial Maciel in 1941, who built it into a powerful international order with 70,000 followers and many wealthy benefactors. Maciel, however, was accused of sexual abuse, drug abuse and of fathering multiple children with women in Europe and Mexico. In 2006, Pope Benedict banned Maciel from active ministry after 20 men testified that he had molested them when they were teens.

No sex outside one man – one woman marriage!