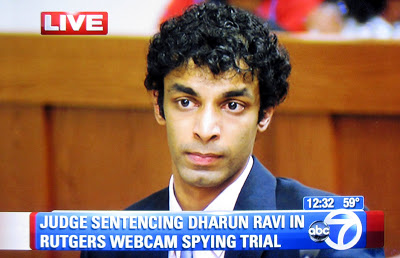 30 Days In Jail For Dharun Ravi

Noting his lack of a prior arrest record and the unlikeness that he will re-offend, today a New Jersey judged sentenced former Rutgers student Drarun Ravi to only 30 days in jail and probation in the case of the suicide of his gay roommate Tyler Clementi. More on the sentencing will follow shortly in this post.

UPDATE: The probation period is three years and includes 300 hours of community service. Ravi has also been fined $11,950 which is to be paid in monthly installments. Ravi will not be deported.

We have been public in taking a position of balance: We opposed throwing the book at Dharun Ravi. We have spoken out against giving him the maximum sentence of 10 years in jail and against deporting him. That would have been vengeance beyond punishment and beyond sending a message to the rest of society. But we have similarly rejected the other extreme that Ravi should have gotten no jail time at all, and today’s sentencing is closer to that extreme than the other. This was not merely a childhood prank gone awry. This was not a crime without bias.

Previous CHRISTIAN LOVE: North Carolina Pastor Calls For Rounding Up “Queers” In An Electrified Pen & Letting Them Die
Next NYPD Sergeant Tells Man: My Dick Will Go In Your Mouth And Come Out Your Ear