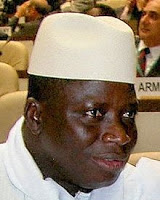 Quote Of The Day – Yahya Jammeh

“If you are to give us aid for men and men or for women and women to marry, leave it; we don’t need your aid because, as long as I am the President of The Gambia, you will never see that happen in this country. One thing we will never compromise, for whatever reason, is the integrity of our culture, our dignity and our sovereignty. As a member of the international community, we would abide by the international conventions that we have signed, but as a country, we will pass legislation that will preserve our culture, our humanity, our dignity and our identity as Africans, West Africans and Gambians.” – Gambian President Yahya Jammeh, adding that no amount of foreign aid would compel him to “offend God” by endorsing what is “evil and unholy.” (Via Rod 2.0)

RELATED: In 2008 Jammeh announced that he would “cut the head off” any homosexual found in Gambia. He then ordered all gay people to leave the country because his anti-gay laws would be “stricter than in Iran.” At one point he had multiple wives, but reports conflict on how many he may currently have.