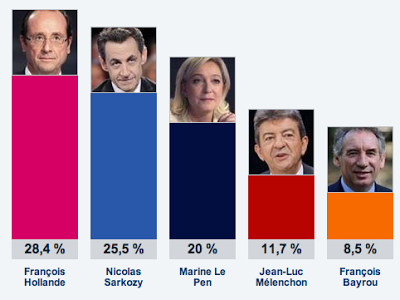 The winner of yesterday’s first round was the Socialist candidate François Hollande, with 28-29 per cent, who will contest the run-off against President Nicolas Sarkozy, who, with 25-27 per cent, became the first incumbent president to lose at the first hurdle. A victory in the May 6 run-off would make Mr Hollande, 57, France’s first Socialist leader to be elected since François Mitterrand in 1988. Last night he pledged to unite the French after Mr Sarkozy’s divisive first term and declared: “I’m best placed to become next president.” He blamed Mr Sarkozy for the rise of the far-Right, saying his “discourse over the last few months has played into the hands of the far-Right”. Confounding predictions of high abstention records, around 80 per cent of France’s 44.5 million-strong electorate turned out to vote for the 10 candidates.

Playing the spoiler was fascist National Front candidate Marine Le Pen, who shocked observers by taking almost 20% of the vote, mostly from previous supporters of Sarkozy. Followed the announcement of the results, Sarkozy issued a plea to Le Pen’s backers by mentioning her hot-button issue, Muslim immigration to France:

“This anxiety, this suffering, I know them, I understand them,” he said. “They concern our borders, outsourcing, control of immigration, work, security, for them and their families. I know that in this fast moving world, the concern of our patriots to preserve their way of life is the key issue in this election.”

Election watchers say the final result may be in Le Pen’s hands, should she decide to throw her support to either of the finalists.