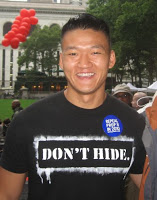 Dan Choi May Represent Himself

Dan Choi has dismissed his lawyers and says he may represent himself in the case which he hopes will wind up before the U.S. Supreme Court. Choi was arrested in late 2010 for handcuffing himself to the White House fence, an action he says is protected by the First Amendment. Lou Chibarro reports at Washington Blade:

“I think for activists, especially for people who protest at the public square, there’s no more powerful thing and there’s no greater empowering moment than to stand before the judge and let them hear your own voice,” Choi said. He said he’s weighing whether to appeal his own case to the Supreme Court to challenge a procedural ruling preventing him from arguing at trial that he was targeted for “vindictive” or “selective” prosecution. If the Supreme Court were to refuse to take his case or if he forgoes that appeal, his trial, which began in August 2011, would resume in the U.S. District Court for the District of Columbia.

The other activists arrested with Choi all agreed to plead guilty and were freed without jail time.