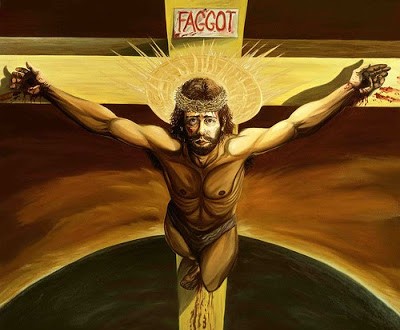 Every community presents Jesus in their own way. There is black Jesus, Asian Jesus, female “Christa” — and now queer Jesus to set people free and heal some of the damage done in Christ’s name. Many, including me, see the queer Christ Jesus as a blessing that builds faith by embodying God’s wildly inclusive love for all. Others attack our ideas as blasphemy. The debate is usually framed as freedom of speech (for LGBT people) vs. freedom of religion (for conservative Christians). But LGBT Christians also have a right to religious freedom. We refuse to concede Jesus to people who act like they own the copyright on Christ, then use him as a weapon to dominate others. Nobody knows for sure whether the historical Jesus was attracted to other men or felt like he was female inside. Some progressive Bible scholars do argue that Jesus had a homosexual relationship.

Emotionally investing in the sexuality of a mythological figure seems rather pointless to me, but Cherry points out that artists who’ve dared to make paintings such as the one above are routinely threatened with death, so obviously it’s extremely important to some people. To her point, here’s a comment from a Newsbusters column about her essay: “Some say we should pray for such deviants. I say it would be refreshing to execute Ms. Cherry but, only after she has been forced to watch her entire family be tortured to death.”

Previous An Easter Message For The Kiddies
Next Word Cloud