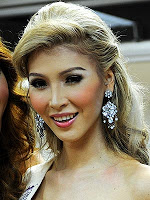 The Miss Universe Pageant, which is owned by Donald Trump, has reversed last week’s decision and will allow transgender contestant Jenna Talackova to compete in the Miss Canada event. But there may be a catch.

“The Miss Universe Organization will allow Jenna Talackova to compete in the 2012 Miss Universe Canada pageant provided she meets the legal gender recognition requirements of Canada, and the standards established by other international competitions,” Michael D. Cohen, executive vice president and special counsel to Donald Trump, who owns the competition, said in an e-mailed statement Monday evening.

Its not yet clear what those requirements may be. The pageant’s move came after prodding from GLAAD, who issued the below statement.

The Miss Universe Organization made the right decision and has taken an important first step. Now, GLAAD urges the Organization to include all women and use this incident to speak out in support of the transgender community. So many women today do not have equal opportunities for employment, housing and safety simply because they are transgender. The Miss Universe Organization should look to state non-discrimination laws and institutions including the Olympics, NCAA and The CW’s America’s Next Top Model, which do not discriminate against transgender women.