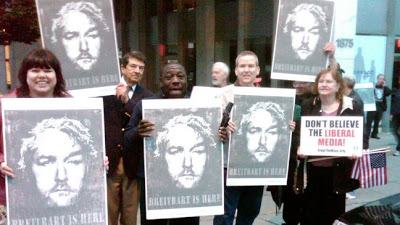 On Saturday followers of Andrew Breitbart protested outside the White House Correspondents Dinner, demanding that President Obama be exposed as his murderer. Or something. According to the Hollywood Reporter, the protesters also hurled abuse at dinner attendee Woody Harrelson over his marijuana use. That’s kinda funny, considering Breitbart’s famed history with drugs.

Previous Editorial Of The Day
Next TODAY: SiriusXM At 2:30PM