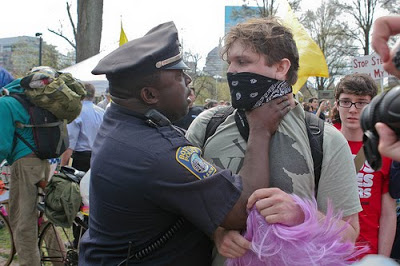 Tea Party Patriots Declare From Podium: “We Will Not Be Silenced By Faggots”

The Tea Party rally I mentioned early this morning was a lot rowdier than even that story suggested. Visit Scott Wooledge’s exhaustive report at Daily Kos for more. One charming highlight came when the speaker at the podium shouted, “We will not be silenced by FAGGOTS!” It also looks like there will be an investigation in the above Boston police officer.

The department was criticized after photographs circulated online that appear to depict a city officer with his right hand around the throat of a man at the protest. The man is wearing a bandanna that covers the lower part of his face. Both of his hands are at his own waist, holding a pink wig. Elaine Driscoll, a spokeswoman for the Boston Police Department, said that the photographs, which were posted to the picture-sharing website Flickr, appeared to be from the Common, when protesters rushed the stage at the Tea Party event, which had a permit. “The aggressive nature of these individuals required officers to call for numerous additional units to respond. The department supports the arrests made by the officers today,” Driscoll said in an e-mail. “As a matter of routine procedure following a day of aggressive protests, the department will review all of the activity that took place during the course of the day.”

Previous TODAY: SiriusXM At 4:30PM
Next Hating Breitbart, The Movie