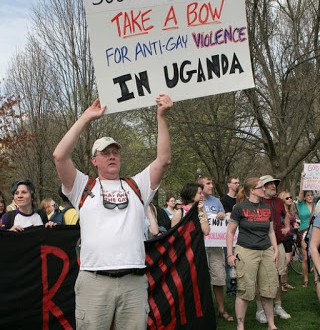 Join The Impact MA sends us a photo and a press release.

A crowd of approximately 75 tea party activists gathered round the bandstand on the Common to hear speakers representing groups like “Show ID to Vote,” “Newsbusters” and the Mass. Republican Assembly. From the outset about 20 protestors from Join the Impact MA stood along the edge of the surrounding sidewalk quietly holding signs condemning Scott Lively and Brian Camenker for their homophobic advocacy. Just before Lively’s and Camenker’s turns at the podium came, roughly 100 exuberant protestors from the Occupy movement charged onto the scene chanting loudly and waving signs. The din became an uproar as Lively took the microphone. In his speech, Lively blasted conservatives who would minimize the importance of social issues. Then he denounced LGBT rights activists as “fascists” who were intent on destroying civilization. Camenker met with similar pushback as he criticized the work of GLSEN for allegedly promoting homosexual recruitment of public school students—in reference to the group’s efforts to prevent anti-LGBT bullying. Lively and Camenker were loudly booed, and much of their speech-making was drowned out by Occupy chants and “mic check” counterpoint.

Previous Chuck Woolery’s Mexican Fence
Next Headline Of The Day