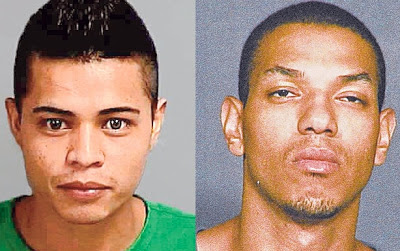 Last week I reported on the murder of gay Chelsea resident John Laubach, who was found bound, gagged, and strangled in his apartment. Police theorized at the time that Laubach had hired his killer on Rentboy.com. Today the NYPD has named suspects.

Investigators believe John Laubach, 57, who had recently had a stroke, hired ex-con Edwin Faulkner, 30, and Juan Carlos Martinez-Herrera, 26, to be his caretakers, a police source said. Both remain at large. Laubach’s W. 22nd St. apartment was ransacked, his laptop, bank card and credit cards stolen, but there was no sign of forced entry. Laubach’s friend, who had a key to the apartment and went to check on him, discovered the body March 2. After the murder, Faulkner, of Brownsville, Brooklyn — who spent nearly three years in state prison for attempted grand larceny — was filmed by a surveillance camera trying to use Laubach’s ATM card at a Chase bank on E. 14th St. in Manhattan, police said.

Call the NYPD if you’ve seen them.