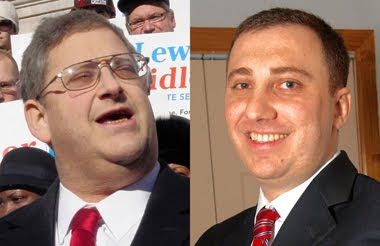 The special election to replace soon-to-be imprisoned NY Sen. Carl Kruger is too close to call, even with 100% of yesterday’s votes counted. Election official say they must now wade through the 2000 absentee ballots before declaring a winner. Even though Kruger’s district will vanish next year, NOM plunged into the election and paid for ads in Brooklyn’s Jewish press, declaring that it was forbidden by Torah law to vote for Democratic NYC Councilman Lew Fidler (above left), who supports gay marriage. Last night both sides declared victory.

Democratic District Leader Frank Seddio, who is expected to run for Fidler’s council seat, said that Storobin and his team lied when they claimed victory. “Storobin’s been lying through the whole campaign,” Seddio said. “Why would he stop now?” Fidler proclaimed victory to dozens of supporters at the Kings Bay Y on Nostrand Avenue. “I’m proud of winning and I’m proud to be your next state senator,” Fidler said. But Storobin was saying the exact same thing less than two miles away to more than 100 supporters at the OPM restaurant on Emmons Avenue.

RELATED: In December NY Sen. Carl Kruger (D) was sentenced to nine years in prison for bribery and corruption in a kickback scheme that involved his gynecologist boyfriend. Kruger earned the enmity of gay activists in 2009 when he voted against same-sex marriage, leading to protests outside the closeted politicians home.