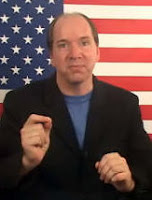 “Christians are called to unite the GOP with Rick Santorum. This is because the Bible says that Mitt Romney opposes Jesus Christ and Christians. Romney is against everything the USA was founded upon. God promises to fix the economy if we vote for mature Christians. God says that the economy declined for taking God out of government, 53-plus million abortions and homosexual sins. Christians understand God controls the economy because He says so in 2Chronicles 7:13-14. Do you believe God? He sends prosperity for obedience and famine for sins” – Pastor Steven “Jazz Hands” Andrew, who adds that God has cursed the Mormons anyway.