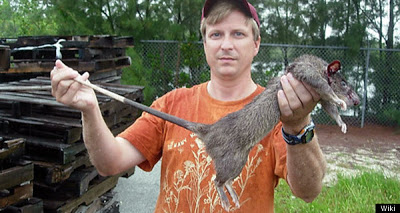 FLORIDA: Rats As Big As Cats

After a local animal breeder released eight of the creatures into the wild, the Florida Keys are struggling with an small infestation of a non-native rat from Africa.

“We thought we had them whipped as of 2009,” said Scott Hardin, exotic species coordinator for Florida’s Fish and Wildlife Conservation Commission. “We think they have not moved far but they clearly reproduced,” he said. The rodents, officially known as the Gambian pouched rat, are the largest known breed of rats in the world. They can grow up to three feet in length and weigh as much as nine pounds. Wildlife officials fear that if the large-sized rodents make it to the Florida mainland, they could devastate local crops.

Last year a massive Gambian rat was killed in a NYC housing project.