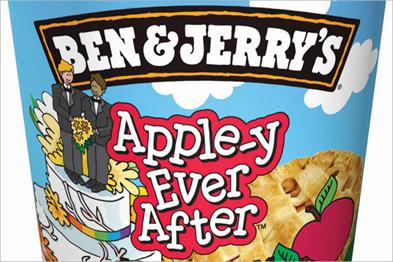 Ben & Jerry’s has issued this Cockney flavor in the UK to support the marriage equality movement.

The ice cream maker is also teaming up with Stonewall to launch a new Facebook app today that asks users to ‘marry’ each other online. ‘Proposing’ through Ben and Jerry’s, users can voice their support for marriage equality and add their name to a letter to prime minister David Cameron backing the move. Laura Doughty, Stonewall’s Deputy CEO says “We’re truly moved by Ben and Jerry’s support for same-sex marriage in Britain. “All people want is to call their long-term relationship by the same name as everyone else. Our strong advice to those who disapprove of same-sex marriage is just not to get married to someone of the same sex.”