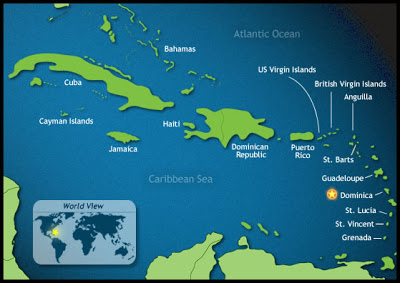 Two passengers of an all-gay cruise docked in the tiny Caribbean nation of Dominica (different from the Dominican Republic) have been charged with public buggery. Dominica residents also claim that they could see men having sex on the ship from their places on the shore. From a clearly biased local news source:

Police Chief Cyrille Carrette has confirmed that two males from California, John Robert Hart and Dennis Jay Mayer, have been charged with buggery and indecent exposure and are expected to appear in court on Thursday morning. The visit of the cruise ship to Dominica apparently carrying only male passengers is generating heated debate online, especially on Dominica News Online after the website posted the story earlier Wednesday. The ship evoked mixed reaction from observers who noted that “only men” were disembarking from the “Celebrity X Cruises” ship docked at the bayfront. Some members of the public gathered there appeared not amused with the development. A few told Dominica News Online that they were protesting what they consider to be “immoral behavior” on that cruise ship. One hair braider told DNO that she was “mentally disturbed, first time I am seeing that in my life”.

Knowing how many Caribbean nations regard homosexuality, I’m betting the two men were merely holding hands as they shopped. Or perhaps, scandal, they kissed. I call bullshit on this story. NOTE: It appears that this is the same all-gay cruise whose passengers photographed Rick Santorum on Saturday. According to the Atlantis Events schedule, that ship is docked in Dominca today.

UPDATE: An honest report from the Associated Press reveals that the two men were actually arrested for having sex ON BOARD the the ship.

Police Constable John George said police boarded the cruise ship and arrested the two men on suspicion of indecent exposure and “buggery,” a term equivalent to sodomy on the island. He identified the men as John Robert Hart, 41, and Dennis Jay Mayer, 43, but did not provide their hometowns. George said the men were seen having sex on the Celebrity Summit cruise ship by someone on the dock. The two were later charged with indecent exposure and are scheduled to appear before a magistrate Thursday morning. If found guilty, they could be fined $370 each and face up to six months in jail.

Atlantis Events president Rich Campbell is also on the ship and says his company will “happily return” to Dominica despite this trifling incident. Insanity.