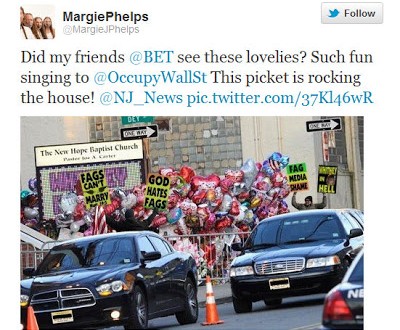 A Twitter account cited as that of the church pastor’s daughter, Margie Phelps, tweeted a low-resolution image of protesters this afternoon as the funeral took place. Star-Ledger reporters on the scene said access to that area had been restricted all day, and confirmed no active protests were occurring in the place depicted in the photograph. Phelps tweeted several taunting messages to media outlets and Occupy Newark protesters who organized to surround Westboro Baptist members if they showed up today:

A later tweet from Phelps claims that God just murdered three people in an avalanche because he’s furious about gay marriage in Washington.