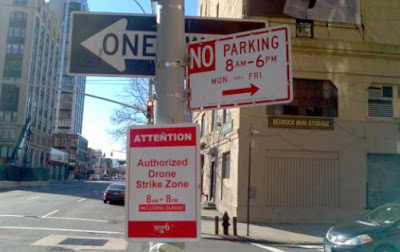 The sign is a fake one put up by a peace activist street artist, but it’s there because the NYPD actually is looking at using lethal military drone vehicles like those used to kill Taliban leaders.

According to an email uncovered through the Freedom of Information Act, the New York Police Department has consulted the Federal Aviation Administration (FAA) on the use of drones as a law enforcement tool. With controversy brewing around many NYPD policies—from racial and religious profiling to mobile street scanners—New Yorkers have much to fear with drones in the hands of their local enforcement. Earlier this month, Congress expanded the use of drones in the US by passing legislation that requires the FAA to make room for unmanned drones in US skies. Police departments in Miami and Houston have already experimented with the use of drones.