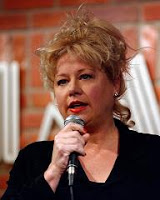 “I’m here to save America from communism. The people of California voted that they did not believe that gay marriage — no gay marriage. They voted that. A judge, probably gay, activist judge, overturned that. That’s what I’m talking about — communism. [snip] That’s not marriage. It’s in the Bible. God created it. He did not create gay marriage. He created man and woman marriage — duh!” – Victoria Jackson, speaking to HuffPo Gay Voices at CPAC. Hit the link for audio of the full interview.