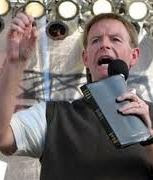 “This ruling substitutes judicial tyranny for the will of the people, who in the majority of states have amended their constitutions, as California did, to preserve marriage as the union of one man and one woman. However, we remain confident that in the end, the Supreme Court will reject the absurd argument that the authors of our Constitution created or even implied a ‘right’ to homosexual ‘marriage,’ and will instead uphold the right of the people to govern themselves. Voters in 31 states have voted to uphold the historic and natural definition of marriage as the union of one man and one woman. Twenty-nine, a majority of American states, have actually inserted such a definition into the text of their state constitutions.” – Tony Perkins, head of the Fascist Research Council.