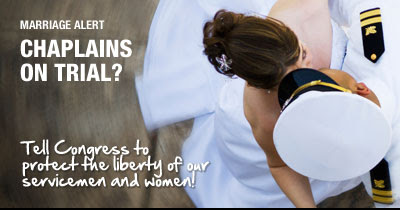 NOM is claiming that the Navy ordered chaplains to perform same-sex marriages.

Did you see this day coming? Who would have thought we needed a federal statute to protect military chaplains—and other servicemen and women—who believe that marriage is between one man and one woman? But just months after the repeal of Don’t Ask Don’t Tell, there is a full-on battle for marriage raging within our nation’s armed forces. Last April, the Navy issued new “sensitivity training” guidelines that required Navy chaplains to perform same-sex marriages.

That never happened, of course, but as we’ve seen countless times, NOM has no problem issuing easily disproved lies when it comes to fundraising. NOM Exposed points out that the Navy actually said that chaplains could choose to perform any ceremony. Don’t expect a retraction.