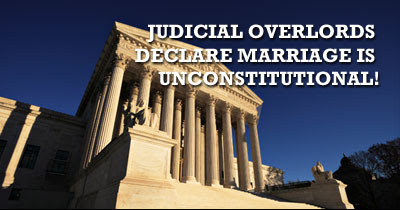 Did you know that the Ninth Circuit Court declared marriage itself to be unconstitutional? According to NOM, it did. Brown Brownshirt:

I don’t know about you but my blood is boiling! Not only must our founding fathers be rolling over in their graves with the preposterous notion that marriage is unconstitutional, but the ruling is an affront to the millions of Americans—the vast majority of the nation—who recognize that man does not have the right to redefine marriage. After all, how can federal judges redefine something that man didn’t create? Make no mistake about it—yesterday’s ruling will also be reversed by the Supreme Court.

I believe that God will stand by those who stand by His design for marriage. We have to do our part to get the case to the Supreme Court, where we can win the ultimate victory to preserve Prop 8 and traditional marriage across the land. Your donation is tax-deductible and will be kept confidential. Whether you can give $10,000, $1,000, $100 or $10, we need your help today! Every penny you give will go directly toward the Prop 8 legal expenses.

If they weren’t so evil, they’d truly be laughable.