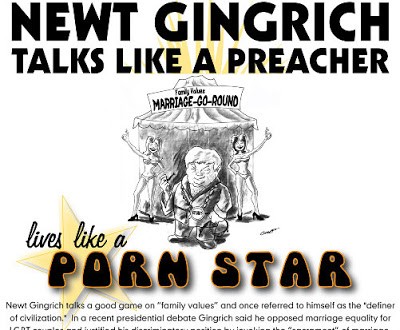 The above full-page ad will appear in today’s edition of Roll Call in Washington DC.

“Newt Gingrich must be blind not to see the glaring dissonance between his belief that he should have whatever kinds of marriages – open or otherwise — that he wants, and his stated conviction that LGBT Americans shouldn’t be allowed to marry at all,” said John Becker, TWO’s Director of Communications. “Loving, committed same-sex couples like my husband and me simply seek to exercise once the same freedom to marry that Mr. Gingrich has so liberally availed himself of.”

Previous CA Hate Group: We Need To Treat Judges Like Newt Said (By Arresting Them?)
Next Today’s Hilarious Lie From NOM