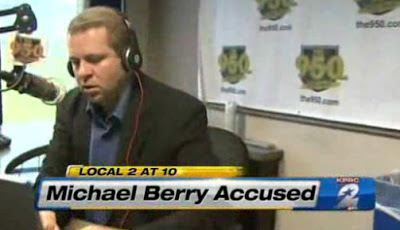 Conservative talk radio host Michael Berry has been accused of leaving the scene of a fender bender after departing a drag show he attended at a popular Houston gay bar. Berry is known for ranting against same-sex marriage and related LGBT issues.

Local 2 Investigates e-mailed Berry for his response to the hit-and-run allegations and the videotape showing him inside the club during that drag show, and Berry replied, “I don’t respond to such things.” Houston police said the hit-and-run was still under investigation, adding that Berry was not listed as being charged with a crime at this point. If additional witnesses are found, or if prosecutors change their minds about the video and the witness account, Berry could be charged with a misdemeanor crime of Failure to Stop and Give Information (FSGI).

The victim told Local 2 Investigates he believes the conservative activist is trying to avoid the issue entirely because of his public stances involving gay people. “If you’re going to stand up and say anti-gay things and be conservative and be Mr. Good Guy, and then when something happens that points you out and puts you in a place with the exact business that you aim to shut down, it kind of makes it seem like I need this to go away and I need it to go away quickly,” said Bennett.

How about this story, Houston? Will this be a big deal? (Tipped by JMG reader Sai)