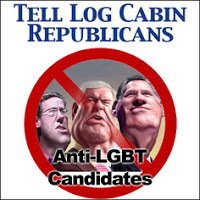 RELATED: The other allegedly gay Republican group, GOProud, has already issued a statement declaring that any of the four remaining GOP candidates would make a better president that Obama. GOProud staffers have been photographed brandishing a Romney banner.