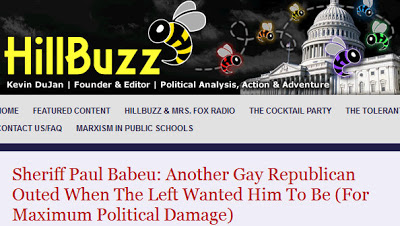 According to Hillbuzz asshat Kevin DuJan, the Democratic National Committee is literally blackmailing almost every closeted gay Republican. And when it becomes politically expedient, the DNC outs them. Like they just did to Sheriff Paul Babeu.

Democrats have a file on every gay man in the Republican Party ranks. There are pictures. There’s video. Most of these guys are being actively blackmailed by the DNC — so that when pushes comes to shove on some important vote, Democrats know they can call up these men and tell them they either vote against their party and constituents, or Democrats will out them in spectacular fashion and cause a big, embarrassing, life-ruining scene.

Props to the wiley DNC. How dastardly and clever of them to hire a barely English-fluent Mexican immigrant and have him troll gay hook-up sites and trick his victims into making threats of deportation. Genius, really.