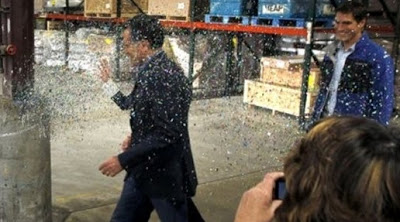 Early reports on Twitter say a “young man” was dragged away by security after “thoroughly” dousing Romney in glitter. I suspect this may be the same kid that glittered Crazy Eyes late last year. At this writing, Ann Romney is reportedly trying to brush the glitter off her husband while he speaks to the press. ABC reports he “has a ton of glitter in his hair.”