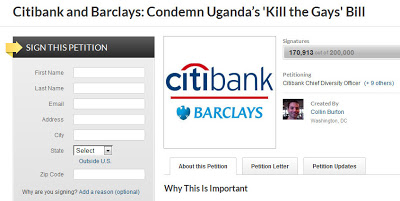 With the “Kill the Gays” bill looming in Uganda’s parliament, Citibank and Barclays have unique and necessary voices that could help stop this bill in its tracks. Their presence in Uganda is significant, and their voices in opposition to the Anti-Homosexuality Bill could have a profound impact in keeping LGBT people safe in Uganda. Ask Citibank and Barclays to publicly condemn Uganda’s “Kill the Gays” bill, and send a loud message to Ugandan legislators that criminalizing homosexuality with lifetime prison sentences and the death penalty won’t be supported by major international businesses.