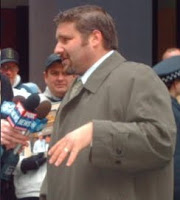 Obama Will Round Up All The Pastors “I am hoping that they have called President Obama’s bluff here, because what’s the alternative now? Are they going to go in and start shutting down Catholic hospitals? Start shutting down Catholic schools? Start fining them inordinate amount of money? Start throwing priests in prison, pastors in prison, organizers and CEOs of Christian hospitals around the country in prison? They might! I wouldn’t be surprised frankly, the fact that they were willing to do something so brazenly unconstitutional who’s to say that they won’t take it to the next step, to the next level, and start rounding up priests who refuse to comply with this unconstitutional dictate?” – Matt Barber, speaking on the Liberty Counsel radio show. (Via Right Wing Watch)

Previous GOProud On Their CPAC Banning
Next CPAC Blind Item