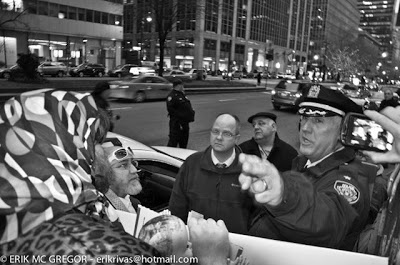 Despite having been given assurances that they could peaceably protest on the sidewalk outside Manhattan’s glitzy Waldorf-Astoria, on Saturday the NYPD broke up the Occupy Wall Street demonstration during the Human Rights Campaign $650/plate gala to honor Goldman Sachs. Via press release:

In NYC Saturday night, February 4, 2012, approximately 80 LGBT grassroots activists from a variety of groups united in common cause and elaborate demonstration to tell HRC: You do not speak for us. Starting at dusk, chanting voices filled Park Avenue as tuxedo-sporting HRC donors arrived at the Waldorf Astoria: “Hey Hey HRC. Where is our equality?” — and — “Everyone pays their tax. Everyone but Goldman Sachs” – rang out repeatedly targeting the Gala’s corporate honoree. Up and down the block between 49th and 50th, a catwalk of activists paraded, picket-fashion-show style, sporting a shimmery 15 x 5 banner that read: SEEK FULL EQUALITY, big mylar letters spelling “HELP,” and a huge sign that read: “HRC is in BED with A SACHS Machine”. Occupy Wall Street locked it all together in what was truly an inspirational convergence of NYC’s grassroots, and beyond.

Cops moved the protesters across the street to a location where the black-tie crowd could not hear their chants. Still some protesters entered the Waldorf lobby to make their case. Some gala attendees reportedly mocked the protest via Twitter. (I’m looking for those tweets.) Many more photos of the action are on the group’s Flickr page.