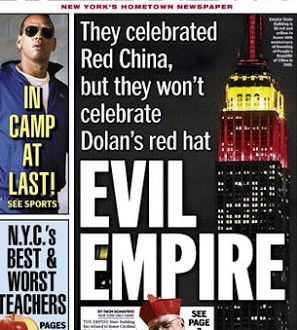 As I reported yesterday, the Catholic League and other theocrats are up in arms because the privately-owned Empire State Building refused to honor the elevation of Cardinal Timothy Dolan by lighting the landmark in red. Today the New York Daily News continues to suckle at Dolan’s pendulous teats with the above cover and a Page Two outraged item which includes the expected bloviation from Bill Donohue.

Religious leaders, politicians and city-dwellers are seeing red. “It’s an insult to Catholics and to the vast majority of New Yorkers who love Cardinal Dolan,” said Bill Donohue, head of the Catholic League. Port Authority officials came to the rescue after Empire State Building owner Anthony Malkin squashed a request by Rep. Michael Grimm (R-S.I.) to pay tribute to Dolan in lights. The rising 1 World Trade Center began glowing red late Friday after the Empire State Building’s Dolan dis. It will continue until next Friday. “Cardinal Dolan has captured the hearts of all New Yorkers with his quick wit, street smarts and compassion for those of all religious faiths,” said PA Executive Director Pat Foye.

Yep, you read that right. The Port Authority, a public agency, has lit the uncompleted World Trade Center in honor of a Catholic Cardinal who allegedly hid more than $130M in church assets rather than pay the victims of the molestations, some of which occurred under his watch. Stop repressing the religious liberties of the Catholic Church! [Photo source]