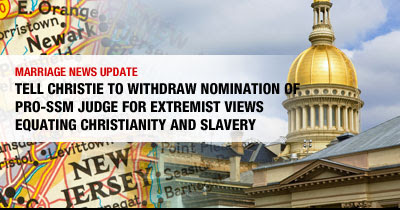 NOM To Chris Christie: Take Back Your Nomination Of That Anti-Christian Homo In perhaps their most dishonest twisting of somebody’s words yet, NOM is demanding that NJ Gov. Chris Christie withdraw the state Supreme Court nomination of Bruce Harris because he supposedly compared Christianity to slavery.

Chris Christie has been the hope of millions of Americans across the country looking for honest conservative leadership. Last week we asked you to thank Gov. Christie for saying he will follow through on his campaign promise to veto same-sex marriage. This week, we have urgent and terrible news to report—Gov. Chris Christie’s nominee to the New Jersey Supreme Court is not only an outspoken advocate for gay marriage, he has extreme and hateful views equating traditional Christian views on sex and marriage with slavery. This kind of intemperate and extreme view should be totally unacceptable in a GOP judicial nominee.

Governor Christie says that Harris has promised to recuse himself when the same-sex marriage comes before the court, but even this unenforceable promise misses the bigger issue: a man who cannot tell the difference between supporting our traditional understanding of marriage and wanting to enslave a people lacks common sense and judicial temperament. And to suggest that legislators should ignore the views of religious constituents, that moral views grounded in the Bible are somehow illegitimate in the public square, seriously compounds the offense.

“When I hear someone say that they believe marriage is only between a man and a woman because that’s the way it’s always been, I think of the many “traditions” that deprived people of their civil rights for centuries: prohibitions on interracial marriage, slavery, (which is even provided for in the Bible), segregation, the subservience of women, to name just a few of these “traditions.”

Christianists are permitted to compare gay people to alcoholics, to horse-fuckers, to child rapists. But saying that the Bible endorsed slavery, which is literally true? Off with that faggot’s head!

Previous Why Obama Is Not A Christian, Part One
Next HRC’s Manhattan Gala To Be Occupied