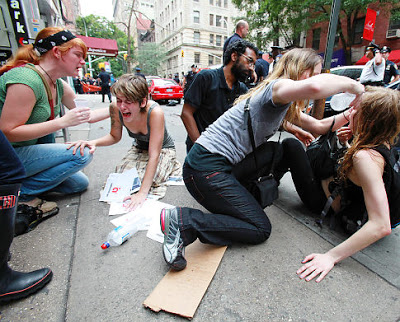 Two women who were pepper-sprayed by the NYPD as they were held inside a protesters pen have filed a lawsuit. The incident was caught live by local news cameras and the video instantly went globally viral, fueling other Occupy protests around the nation.

Chelsea Elliott and Jeanne Mansfield are suing Deputy Inspector Anthony Bologna in Manhattan Federal Court for blasting them in the face with pepper-spray during a protest last Sept. 24 near Union Square. Bologna was docked 10 days of vacation for violating NYPD regulations. In an interview Monday, Mansfield, 24, a Boston writer, said she was suing because she wanted to put the NYPD on notice that what Bologna did was wrong. “I was attending a peaceful demonstration when I was met with what I feel was an undue amount of force,” she said. Mansfield said she is sympathetic to police in general but said she didn’t deserve to be pepper-sprayed. “

The suit claims that the women’s right to free assembly and free speech were violated by the attack.

Previous TODAY IN NYC: Dogs Against Romney Protest Outside Westminster Show
Next This Is An Actual Thing